Three weeks on from my last blog post, and we’re still waiting for the plumber to come to work. He was sighted briefly one morning last week, wandering around the site drinking a bottle of coca cola, but then he succumbed to the “febra di estate”, and hasn’t been seen since. And so we wait. And wait. And wait. The Plumber’s absence, coupled with the extreme heat, mean that we are getting rather behind on our original four month schedule. Of course, four months was always going to be five months, as August doesn’t count when calculating the duration of a project. We’re now eight weeks into the build, however, and apart from the first fix electrics, I’m struggling to think of any real progress that has been made since the end of week three. This lack of progress should be rather disheartening, but somehow, maybe because we are still in the honeymoon phase of our little adventure, we’re not really all that bothered. In fact, we’re probably not as bothered as we should be, given that we’re in process of emptying the flat in Rome.

During our eight weeks upstairs, we’ve had a rather jolly time. We’ve hosted four sets of overnight visitors, our son has visited, and we’ve also managed to host a couple of lunches, although I will admit that cooking in “the penthouse” is a bit of a trial, and that the initial novelty of washing up in the bathroom sink has rather worn off. I do still love the fairy lights in my little kitchen though.

With two weeks to go until we, and all our belongings have to vacate the apartment in Rome, the ground floor part of the project here should be nearing completion. We should be sleeping in our future bed and breakfast suite, cooking in our fabulous new open plan kitchen, and enjoying the enlarged views of our olive hill through our gorgeous new double glazed windows. 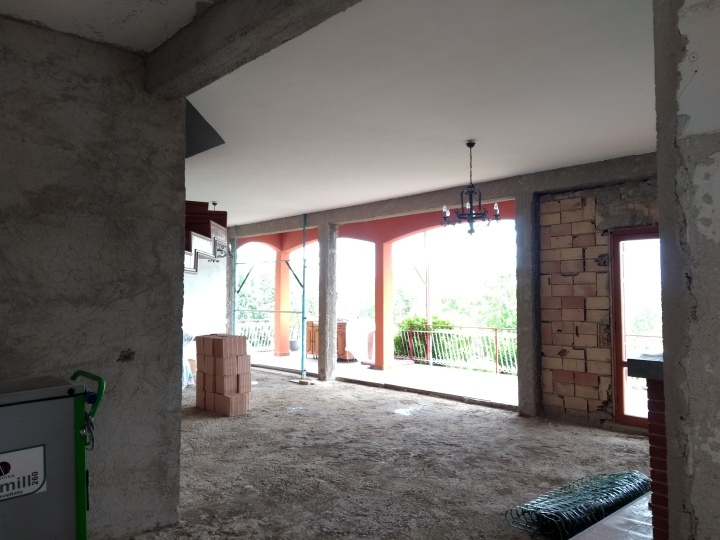 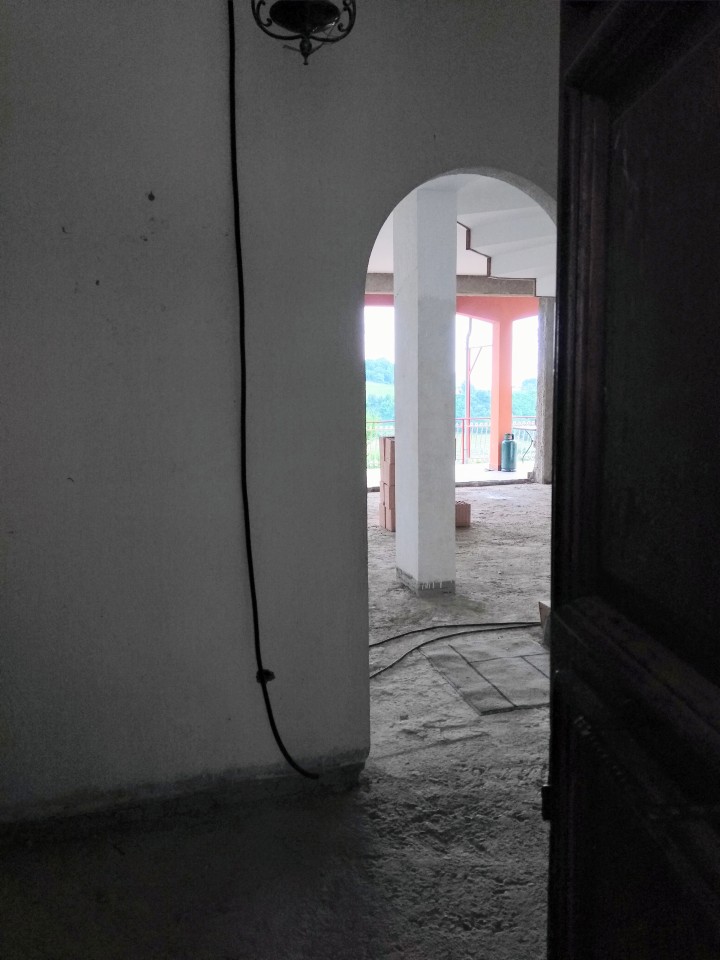 Yup. Open plan alright, but rather more open plan than we had intended, and minus floors, walls, windows, a kitchen, electricity, water … But our rose tinted spectacles remain firmly in place.

After all, even taking a shower is exciting when you live on a construction site! Our ancient hip bath (with electric water heater over it) has been “converted” to a shower. My size five feet just (only just) fit in the “deep end”, and my five foot four frame just (only just) fits under the shower head, which just (only just) fits under the water heater. A flimsy shower curtain gets drawn over the power switch for the water heater (did I mention that it is an electric heater?), to prevent it from getting wet, and we almost always remember to turn the heater off before we perform the various contortions required to climb into the “shower” and get wet(ish). How can one fail to enjoy a life where something as banal as taking a shower is an extreme sport?

In preparation for the loss of the Rome flat, and in the hope that our belongings will survive the building process, yesterday, on the way home from work, I popped into the ferramenta, where my mission was to buy mouse traps and “pet friendly” poison. All of our belongings will have to be stored in the cantina for the next several months, and we’d prefer that they are not eaten by Topolino and his friends. Traps and poison in the shopping basket, I approached the cash desk in rather a hurry, as choosing a pet friendly method of dispatching mice had proved rather more time consuming than I had anticipated.

“Ah, signora, I see that you are experiencing problems with mice!” announced Friendly Shop Keeper to both myself, and the queue behind me.

“And I see that it is very important to you that you don’t kill your dogs?” He probed.

That was the moment where I lost the rest of the day, of course, as pet friendly mouse poisoning techniques became the subject for the Afternoon Debate in an argument that rapidly engulfed the entire shop: staff and customers alike.

And that, dear reader, is why despite the fact that I have to brush builder’s dust off my pans before preparing supper every evening, I LOVE living here.

After all, when showering is an adrenaline pumping sport, and buying mouse traps requires community participation, what’s not to love?

Let's go
Harvest A GoGo!
Special Guest at this evening's grove tour.
Taralli Two Ways, and Lockdown Jam, ready for this evening's Grove Tour and tasting event.
Appointment in Rome today, and and excuse to clear the olive twigs out of my hair, and wear some proper clothes!
One week until harvest!!!