I’m feeling rather sorry for the two chaps who work for The Builder this week.

Having dug out 120 metres of old floor, and smashed their way through every internal wall on the ground floor, they were all set to remove the back wall of the house this week. But then I pointed out that this would leave the house insecure, and that living in an insecure house made me feel nervous. And so we agreed that they would not remove the wall until the new window frames arrived, meaning that we could fit them, build the new walls around them, and fill the holes up with plyboard, thus providing us with a dark, but secure house in which to live until the works are finished.

In keeping with our organic farm status, we aim to be as eco friendly as possible in all that we do. For the building work, this effectively means that the crew are spending the hottest June week on record (38° today and rising) turning everything that previously constituted the ground floor of our home into little bits of reusable stuff, and carting it across the driveway to be stored until it is reused. 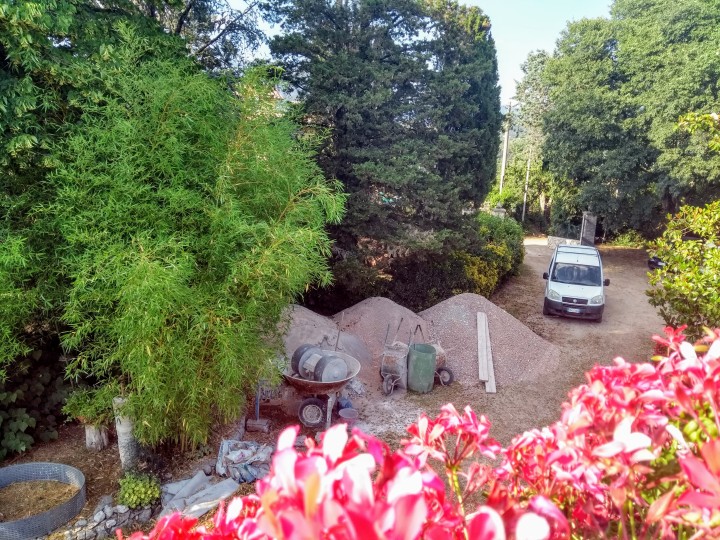 The walls, the various tiles, and the flooring have been graded into three different types of rubble, using the rather natty (and surprisingly quiet) machine below. We have already reused a lot of the finest grade (almost powder) to coat the new walls that have been built. The mid grade will be used underneath the new floor, and the roughest grade will be spread on the track that we use to drive up and down our hill, when accessing the bottom end of the olive groves, and the vineyard. 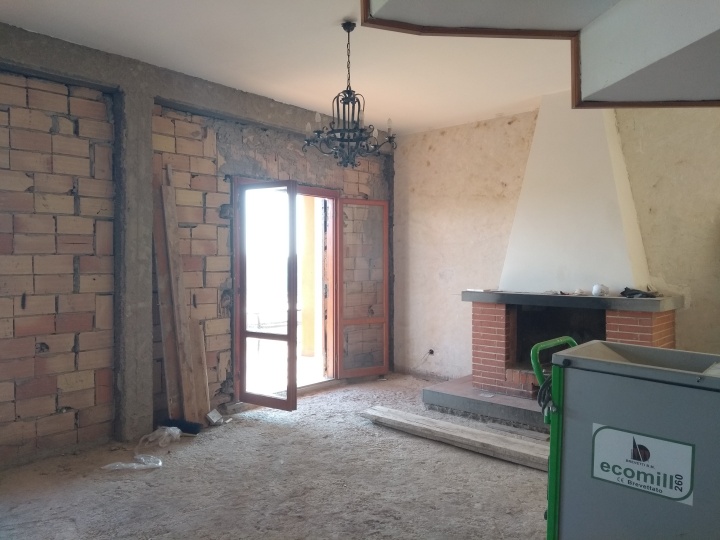 Outside, we have survived our first Organic Inspection. I’m using The Royal We here, as I was on my way to work when The Inspector called, leaving Scott to race around digging out every piece of paper that was demanded. One thing that we have learned about organic farming is that it requires the use of whole forests of paper, every time you even think about getting on with the outdoor chores. In fact, I do actually wonder how organic farmers find the time to do any farming at all, such are the demands of the paperwork.

Anyhow, “we” passed the inspection, and our guests from the UK were treated to an amusing display of hand gestures, exasperated officials, and Scott’s best attempts to understand my “filing system”, whilst simultaneously mowing the olive grove, dealing with our Proper Agricultural Workers, and answering a million “where do you want this” questions from The Builder. I had, of course, buggered off to work and left him to it. I’d like to say that he also cooked a Full Fried Breakfast for our guests, but he almost spontaneously combusted when I suggested that our dear friends might enjoy one …

In addition to passing our organic inspection, we’ve started the summer routine in the vineyard. The vines have had their first summer prune, and leaves have been cut back so that the baby grape bunches get the full benefit from the sun. Last year’s wine is finding various loving homes, and I couldn’t resist the photo op that presented itself when our first labeled bottles flew the nest. 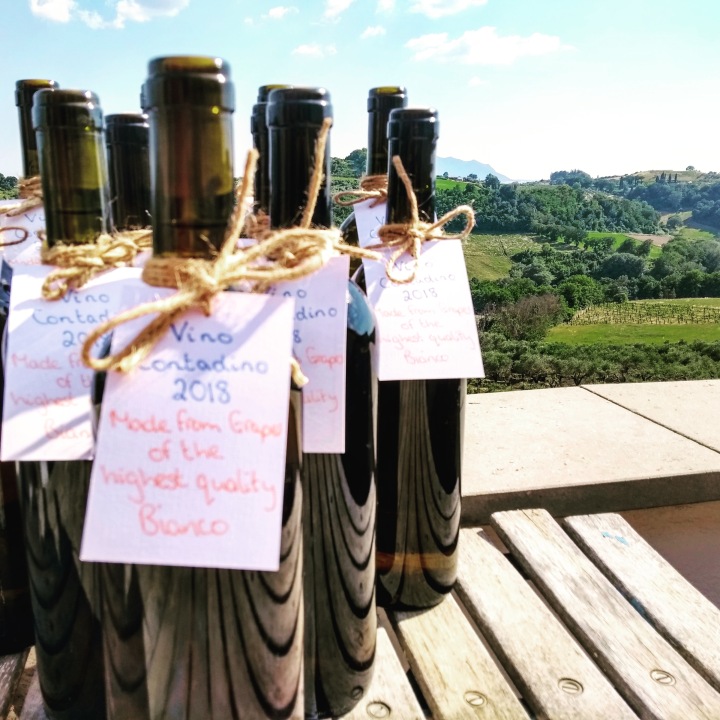 The hay crop is finally cut, albeit over a month late, due to the spectacularly wet month that May was. Farmers all around us have become nocturnal beings, as it is impossible to work in the fields during daylight hours. The hay is cut one night, turned (just once) the following night, and baled on the third night. Ours will be baled tonight.

And of course, we have entered the season of the Festa. Poor Bella still hates the season of the Festa, even though she’s totally habituated to the sounds of jackhammers, power tools, and The Rubble Maker. Last weekend we were able to take our most recent guests to the Festa of Thanks, which took the form of a free meal (with wine, of course), for the entire village, at the expense of the recently re-elected mayor’s office. We were grateful for this, but even more grateful that the budget for Thanks didn’t run to fireworks.

Even Bella likes the Festa of Thanks!

Snow day!
With thanks to @imlivinwrite for this fabulous photo, I humbly present my first blog post in a loooong time!
This year, for the first time, some of our trees have been adopted by people. In the UK, Finland, and the USA.
As the sun sets on 2022, we would like to thank everybody who has supported our Olive Hill Adventure this year.
It's #smallbusinesssaturday, and we will be in the #cloisters of #durhamcathedral with our delicious #organic #evoo, handmade pesto, and lots of other goodies!
Our Christmas Sales Events are not just about our delicious, hand picked, single estate, certified organic, Extra Virgin Olive Oil.