In the months leading up to the purchase of our Olive Hill, and particularly in the months (three) since, we have spent a lot of time “fire fighting”.

We have had to find our way through bureaucracy that suddenly required us to produce previously unknown and unheard of documents at a moment’s notice; we’ve purchased emergency items that we don’t know the name of in English at the ferramenta (where self service is NOT allowed), and we’ve even secured emergency repairs to the tractor after we (HE) have driven it somewhere stupid where it broke down.  We’ve had problems with paperwork, electricity, mechanical items, trees, washing machines, heaters, coolers, lawn mowers and just about every power tool that you could mention (and quite a few that you probably couldn’t), but never, until this week, have we had to deal with problems relating to water.

So that became the theme of the week.

We have entered a stormy period here in Sabina, and for the last couple of weeks we have woken up to gorgeous blue skies, that then darken menacingly just as we finish work for the morning and start to think about a relaxing, al fresco lunch in the shade.

But nothing prepared us for last Tuesday’s storm, which was absolutely massive, and brought down a tree in the garden.  I have probably mentioned before that Bella The Dog does not like storms.  Such is her terror of them, that she has made Holly The Other Dog even more scared than Bella is.  So, at the first hint of a darkening sky, the two of them take themselves off to the front bedroom, where they hide quietly under the bed, as it is their place of safety.  Coincidentally, it is also the location of last week’s lightning strike, and so when they were brave enough to leave the house, this is what they found outside their window: 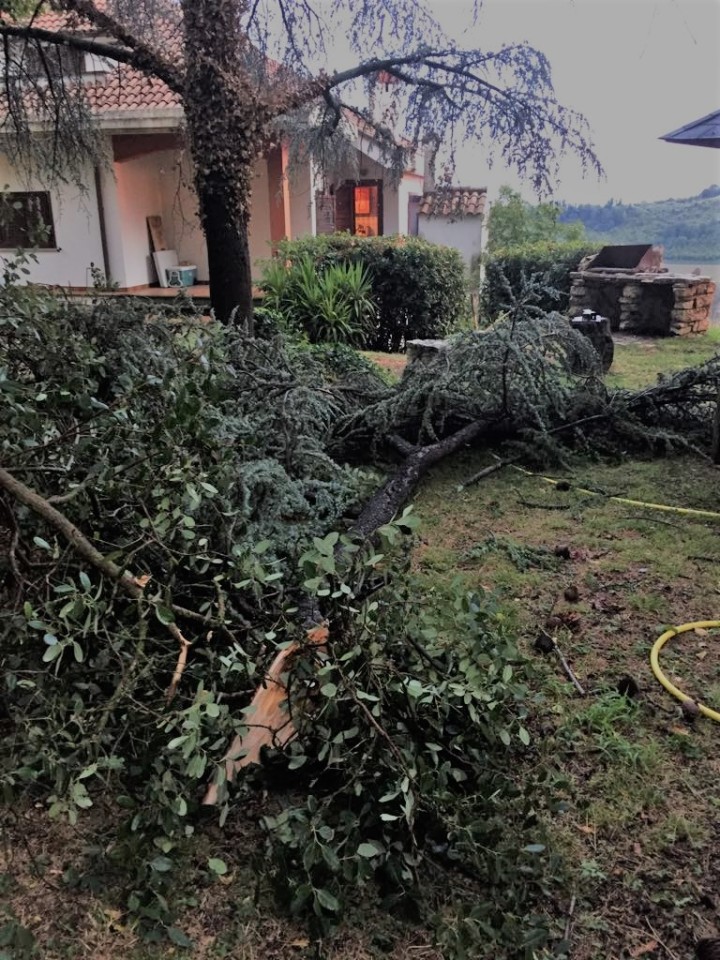 There was plenty of damage elsewhere too, with temporary rivers running down our hill in several places, the base of the overground pool was also eroded away by the water that poured down the hill.  So far, the pool is just sloping at a slightly alarming angle, but it hasn’t collapsed … yet.

Next water problem was my back.  In common with most of our neighbours, we don’t drink tap water here, the pipes into the house are of an age where they are probably made of lead, and we prefer not to go blind.  Luckily, the commune has thought of our worries in advance, and so they provide a service to residents where we can go and fill our bottles with the same water that they pipe into the houses, but at a convenient location several miles away.  The “village water cooler” is a super facility, where we all gather and chat, as we fill our bottles with refrigerated tap water that we can take home and put in our fridges.  Obviously we pay for this service, but it is spectacularly cheap, and available in flat or fizzy, and of course, we get to chat in bad Italian with our bemused neighbours while we are there.  Almost free Italian lessons! 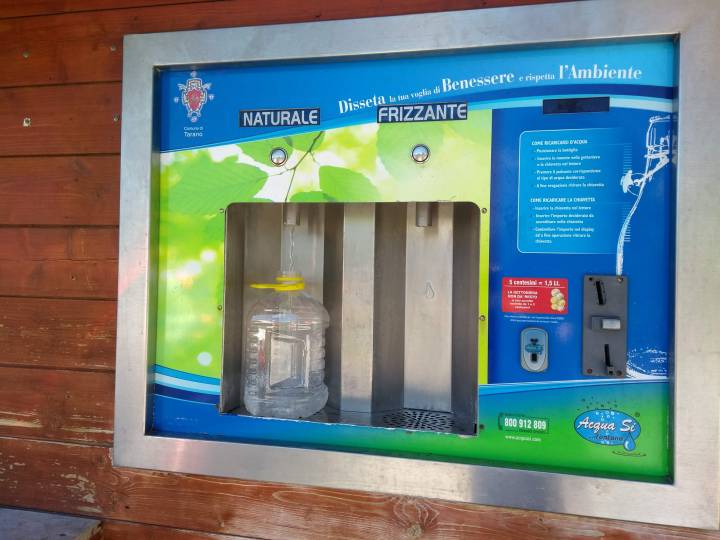 Sadly, being a lady of a certain age, I am prone to the odd trapped nerve, spasm and seizing up episode in my back.  So on Saturday morning, I decided to move the 20 litres of water that we had collected from the water cooler, and put it on the floor, without bending my back.  The rest of Saturday is something of a blur, thanks to the codeine and wine cocktail that the pain obliged me to consume.

So imagine my surprise when on Sunday morning, Lovely Indispensable Neighbour summoned me to show me … a HUGE flood of the commune’s precious tap water, emanating from a burst pipe in our gateway, and pouring down the street.  Neighbour announced that she was going out for the day, and left immediately, with a cheery wave.  I raced back to the house at the snail’s pace dictated by my dodgy back, and called for Scott to come outside immediately, armed with a bucket, shovel, spade, rake, mop, brush and a towel for good measure, but no matter how far he dug, scraped, mopped and swore, he could not stop the leak.

Every now and then, I think that I am becoming used to life here, and that all is becoming hum drum and normal.  So having discovered the water leak, I accessed commune website (as I said, the commune supply our tap water) in order to find the number to call to report the problem.

No number, anywhere on the site.

With the swearing from outside becoming louder and louder, I called the normal commune number, but of course, being a Sunday, I just got an answerphone.  Over the course of the next hour, I tried everything.  I messaged various neighbours, but nobody responded, and so I started reading old news articles on the website, hoping for a hint as to what to do.  All the while, the water was pouring, pouring, pouring down the street.

Eventually, I actually managed to find the mayor’s mobile phone number, in an old article about what to do if one found oneself snowed in.  I sent her a text, pleading for a number of somebody to call. No response, nothing.  Just silence.

At this moment, Friendly Neighbour appeared, to tell us that we had a serious water leak.  He swears REALLY well in English, so once we had exhausted his repertoire, he told me to call for Maurizio, the commune’s plumber.  He didn’t have Maurizio’s number (cue more swearing), but sent me to the local petrol station, as Cinzia, Maurizio’s wife worked there.  “Tell them you live next door to Indispensable Neighbour, everybody knows her!”

Ten minutes later, I introduced myself to Cinzia, and told her what my problem was, and where I lived.  “Ah yes, the pharmacist’s daughter?” …”Um, I don’t know” … “Or maybe the postman’s sister?” … Um, I don’t know … “Oh no, you mean the butcher’s mum?” … Um ….  By now, we had quite a crowd of customers trying to work out where I live, as clearly, my address would not suffice.  “AH!!! The house with the burgada?”  asked an elderly gentleman … “Um, I’m really sorry, I do’t know what that is” I said, looking at the floor, and shuffling my feet.  I really must work harder on my Italian.  Paper and pencils were fetched from another customer’s car, and a picture of a driveway, with a circle of flowers in the centre was drawn.  “Yes!  That’s my house!” I exclaimed, and so Cinzia phoned her husband to explain the problem.  Except that he already knew about the water leak, as he was already at my house.  You see, the mayor had read my text message, and dispatched Maurizio the plumber, without any need of a description of my garden or knowledge of to whom my neighbour was related.

Maurizio is ex army, so by the time I got home, he and Scott (and Friendly Neighbour, of course), were bonding over tales of military derring do.  Maurizio had turned our water off, thus stopping the leak, but reassured us that we could still drink water from the village water cooler, and bath in our slightly wobbly swimming pool, as long as we took care to avoid the bit where it was visibly buckling.  He left, promising to return on Monday morning to fix the pipe.

And so ended our week of watery problems, and we found ourselves surrounded by water, water everywhere, with not a drop to drink.

Snow day!
With thanks to @imlivinwrite for this fabulous photo, I humbly present my first blog post in a loooong time!
This year, for the first time, some of our trees have been adopted by people. In the UK, Finland, and the USA.
As the sun sets on 2022, we would like to thank everybody who has supported our Olive Hill Adventure this year.
It's #smallbusinesssaturday, and we will be in the #cloisters of #durhamcathedral with our delicious #organic #evoo, handmade pesto, and lots of other goodies!
Our Christmas Sales Events are not just about our delicious, hand picked, single estate, certified organic, Extra Virgin Olive Oil.