Way way back in May 1983, a young Scott signed a rather important document, in which he promised to serve in Her Majesty’s Royal Air Force until 12 July 2018. In a strange twist of fate, those not glued to England’s performance in the World Cup may have noticed that the Royal Air Force celebrated its 100th birthday in some style this week, and so has featured rather heavily in the news, with the most fabulous parade, and a wonderful flypast over Buckingham Palace.

But today is not, in fact, the day on which Scott will become a retired officer, and so we have been apart most of the week. He has been carrying on as normal, working in Rome, and the dogs and I have been up at the farm, pruning trees. Well, I have been pruning trees, they have mostly slept on the sofa.

It’s not normal to prune trees at this time of year, but due to a combination of the 2017 drought, followed by the harshest winter for years, and a stormy spring, all preceded by several years of neglect, our trees are in a pretty sorry state. It took us a month to get the ground underneath the trees cleared out of debris and chest high weeds, and so what we can see now is that the trees are all wearing a thick skirt of dead branches. This is bad on many levels. You see, olives need a lot of light, and ours have almost none. They also need a good amount of air circulation, and ours have almost none. In our pruning course back in February, we were instructed to remove all the “chimneys” (vertical growth) from our trees, to prune in order to allow light to penetrate every single leaf (we are not growing umbrellas), and that a swallow should be able to fly through a well pruned tree without any trouble. It’s still possible to see that once upon a time, our trees were the envy of the area, shaped as they were like beautiful wine glasses, through which swallows could fly unimpeded by chimneys or umbrellas, but now it would be a brave swallow that attempted to navigate its way up our hill.

As a result of all of this, we are clearing the trees at this time of year, because the summer is the best time of year to remove branches infected with olive knot. And boy do we have a lot of olive knot. Yes, it’s hotter than hell by 11am, but each day, armed with gardening gloves (to protect my manicure), a baseball cap (imagine the horror of a cicada falling into one’s hair), and a bottle of iced tea, I bravely head out and tackle the chimneys, umbrellas and olive knot that are infesting my hill. Sixty five trees done, three hundred and thirty five to go.

Here is Tree Number Sixty before its tidy up: 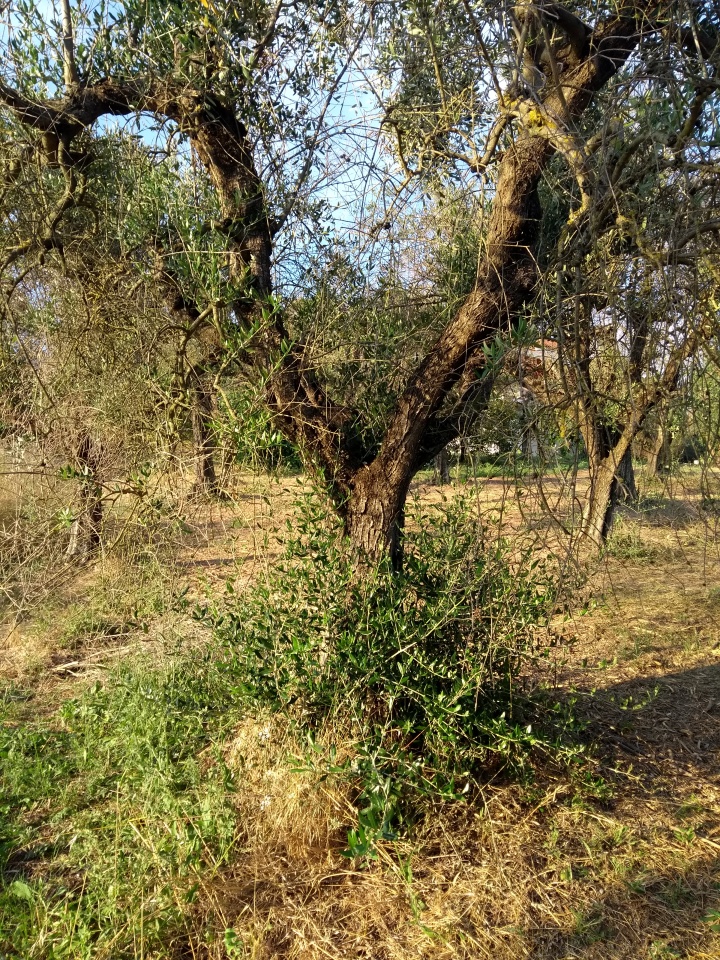 The dead wood is not that visible in the picture, as TN60 (to its friends) was actually comparitively healthy, but you can see that it is putting most of its energy into growing suckers. We leave a couple of suckers on each tree, in case another harsh winter kills off TN60 completely. In this case TN60 would be chopped down, regrow from the suckers we have left at its base, and thus become known as The Tree Formerly Known As Tree Number Sixty: or more simply, TTFKATN60 … and here it is after its hair cut: 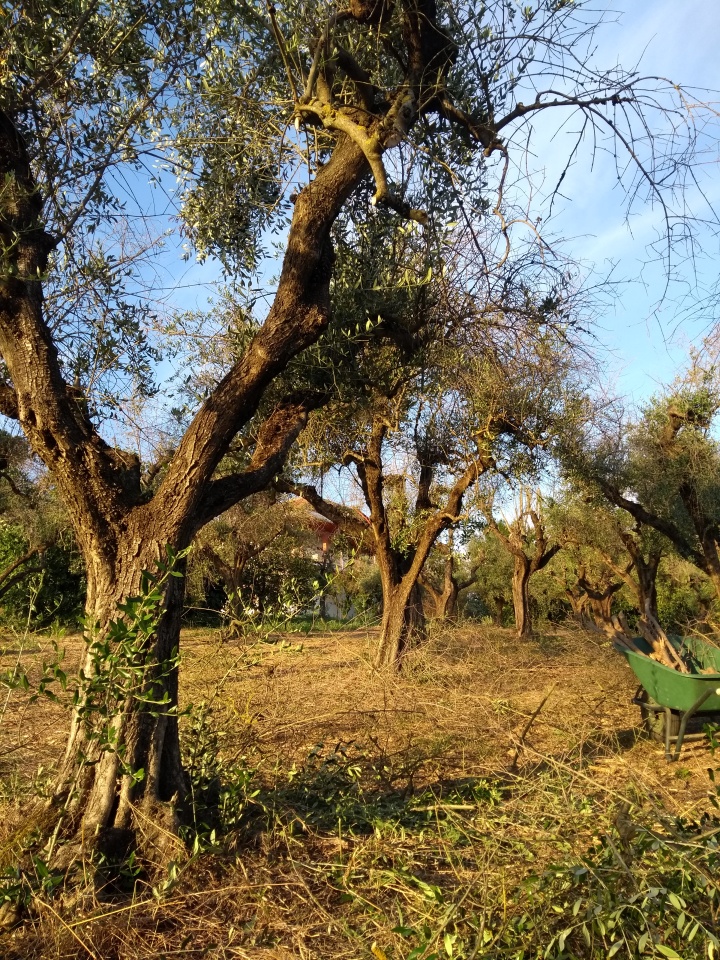 Yes, I know that it still has dead bits, but I am short, and so can only reach so high into the tree! What you should be able to see is that TN60 is once again the shape of a wine glass, rather than an umbrella. This winter, it will be given a proper prune, rather than a summer trim, and hopefully in a year or two, the whole grove will have been restored to full health.

But today is not a day for pruning, as we are celebrating the day on which Scott should have left the RAF. We had a little lie in, harvested today’s figs, beans and blackberries, then headed off to the top of the mountain in the middle of our view, where we didn’t manage to have any lunch, as everything was closed.

So. Happy birthday RAF, happy birthday Scott, and roll on tomorrow, when life will continue just as it has done before, but with added memories!

Let's go
Harvest A GoGo!
Special Guest at this evening's grove tour.
Taralli Two Ways, and Lockdown Jam, ready for this evening's Grove Tour and tasting event.
Appointment in Rome today, and and excuse to clear the olive twigs out of my hair, and wear some proper clothes!
One week until harvest!!!